Nuclear launch codes are at risk. 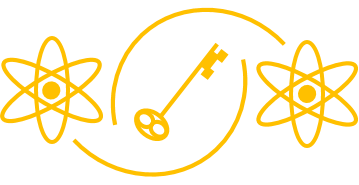 The fate of the free world is in your hands!

Are YOU up to the challenge?

LabEscape now offers 3 separate missions, all part of one story arc following renowned quantum physicist Professor Schrödenberg. Each mission features a unique set of awesome puzzles and challenges, all designed to amaze, delight, and astound! As always, absolutely NO science background is necessary to succeed, only curiosity, good communication skills and a willingness to collaborate with your fellow agents. So choose YOUR adventure today!

The Mystery of the Missing Professor S.

Professor Schrödenberg, one of the world's foremost quantum physicists, was working on a top-secret project for a clandestine government organization. But she disappeared three weeks ago, amidst fears that hostile agents were after her research: creating a quantum computer that could open any digital lock or encrypted message.

If such a device fell into the wrong hands, the security of the entire world would be at risk! To make matters worse, the two groups of agents sent to investigate the scientist's secret lab also vanished. Now it's up to you to find out what happened to Professor S., the missing agents and her breakthrough technology before hostile forces get there first.

Oh... did we mention that Professor S. is paranoid about intruders in her lab?

Return to the Lab

Professor S. is gone, but her research lives on and has apparently fallen into the wrong hands. Now the security of the whole planet hangs in the balance. Only YOU can determine the origin of the strange power surges from the Professor's old secret lab and who is using her quantum processor to hold the entire country hostage. But time's running out, for you and the free world!

At least one member of your group should have run the original scenario; if no one has, you should sign up for that instead. You wouldn't want to see The Empire Strikes Back without seeing Star Wars first...

Long before her quantum technology fell into the wrong hands (as encountered in Return to the Lab), even before Professor S. disappeared (as occurred in the original Mystery of the Missing Professor S.), there was…The Prequel! World-renowned quantum physicist Professor Alberta Pauline Schrödenberg desperately needs your help—the fate and security of the entire world (and more importantly, her funding!) hang in the balance. Find out how close the world came to never having her breakthrough quantum technology in the first place, how a top quantum security expert secures her data, and most importantly, what that dog crate was REALLY used for! As her newest research interns, you'll have to search the Professor's lab, solve mind-blowing puzzles to reveal clues, and hopefully find a way to complete your mission, saving the future, and your salary!

Return to the Lab

Find available times on the booking page.
Be sure to check out our latest promotions and discounts! 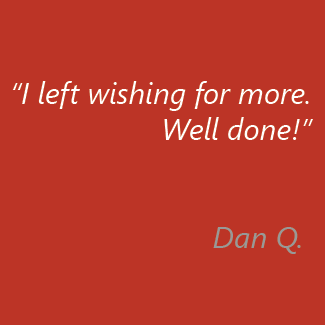 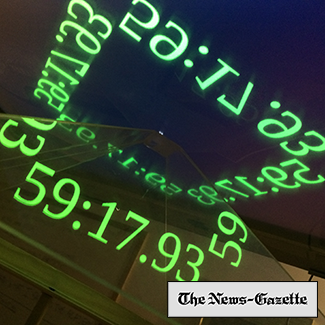 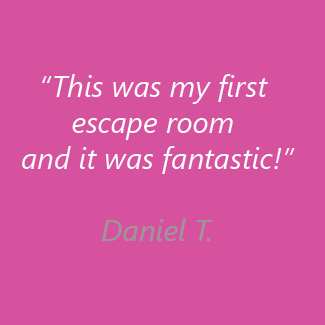 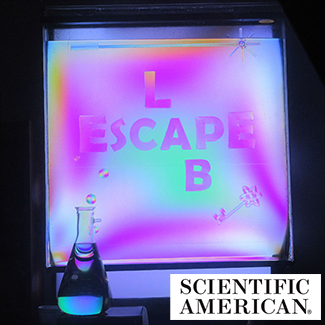 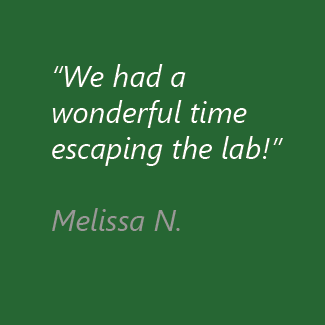 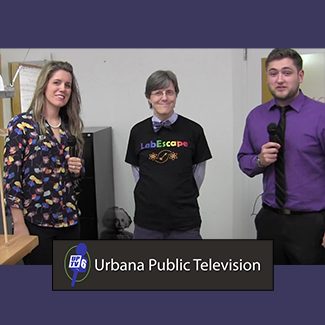 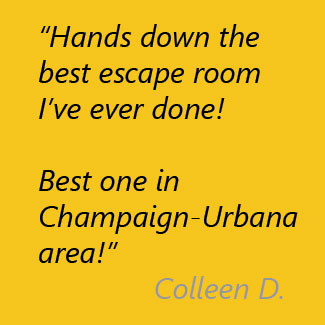 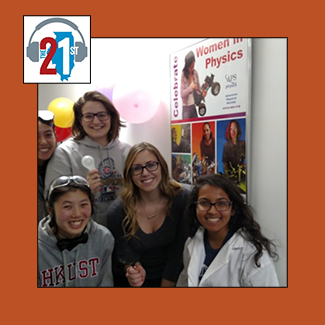 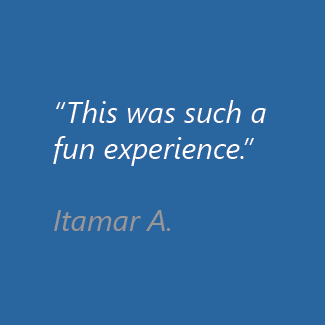 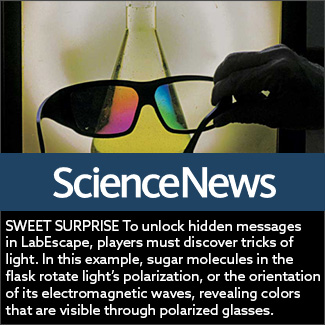 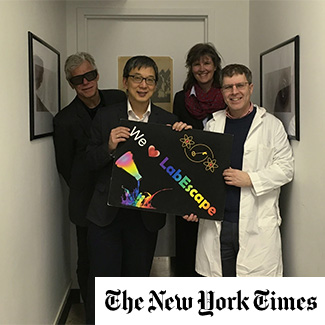 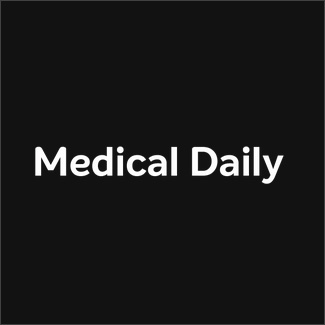 Our mission: the Science of Fun

At the LabEscape project we are committed to creating an innovative escape game unlike any other.

First and foremost, we want to provide you a rewarding and thrilling experience that will leave you fondly reminiscing long after you’ve left. We also want to show you that science can be amazing, useful, beautiful, and yes, even fun!

We've created a series of jaw-dropping puzzles based on various science phenomena. You will literally see an object disappear before your eyes—no CGI tricks here! We’ll also provide simple explanations for these amazing science phenomena, with examples of how they already play a huge role "behind the scenes" in your daily life.

What is an "escape room" anyway?

Escape rooms are a recreational activity that started about a decade ago in Asia, spread through Europe, and have become increasingly popular in the US last few years. Typically you work with a small group to solve a series of puzzles in order to complete your mission, which typically involves escaping from the space.

Absolutely! In some ways it's like being in an adventure movie where you’re writing the script as you go.

While some escape rooms can have horror themes, LabEscape rooms are not scary in the least, although certainly the mood can be pretty intense if the countdown timer is ticking away its last 30 seconds as you are trying to complete the final puzzle.

How many people should go?

We recommend groups of 4 to 6 as optimal for our space. Although many escape rooms run larger groups, our experience is that in that case most people don't see most of the puzzles, and our puzzles are all pretty awesome, so we want as many people to experience that as possible.

What if we have seven people in our group, can that still work?

We can override the usual six person limit if you email us after you've already signed up for six people in the slot. On RARER OCCASIONS we can even increase it to eight people, although in that case we might instead recommend 2 groups of 4.

What's the difference between Novice and Challenge levels?

The Novice level is for agents without much or any previous escape room experience—as people who have done escape rooms know, there is a bit of a learning curve, just like there is for doing crossword puzzles. The Challenge level involves several extra puzzles (and in the original scenario 10 extra minutes to complete the mission). If you've already done several escape rooms—and they went reasonably well—and/or if you have a strong science background already, we recommend you try the challenge level. Note that at the moment the sequel storyline is a bit more challenging than the original, so if you did the Novice for the original, you probably want to do that for the sequel as well.

I want to bring a bunch of people from work as a team-building exercise, but none of your listed slots are during usual work hours – are other times possible?

Yes! Depending on the schedule of our workers, we can often accommodate other times, e.g., morning, lunch, mid-afternoon. Just email us and we'll work to find a common solution.

I want to bring my junior high school (science, math, art, theater, Dr. Who,…) club, but there are 10 of us – what options are there? Do you have group discounts?

As stated on our sign-up page, we recommend groups of 4 – 6 agents as optimal; any more than that and most agents won't see most puzzles, which would defeat the purpose, and not be an optimal experience. What we can do is run groups in somewhat rapid succession, e.g. one group that 5 p.m. and another at 6:30 p.m. This has worked reasonably well in the past for other groups. For even larger groups we also sometimes coordinate with CU Adventures in Time and Space, the other Urbana escape room. If you're booking several runs with us, we may be able to offer you a slight discount; however, please understand that we're already both non-profit and non-profitable.

The website specifies ages 12 and above, how strict is that age restriction?

While we certainly have had agents as young as 10 go through with their families, the nature of LabEscape lends itself better to somewhat older agents. Our experience is that younger agents tend to get bored rather easily—and when they get bored they sometimes can unintentionally become rather entropy–producing, resulting in damage to our somewhat sensitive scientific equipment. If you have younger children, we recommend you check out CU Adventures in Time and Space (Urbana), or Brainstorm Escapes (Champaign), which have rooms suitable for a younger audience.

Something came up and I have to cancel, can I get a refund?

This depends somewhat on how early you let us know. If you simply don't show up to your reserved slot, we can't offer a refund, because we've already had to have the workers change their schedules in order to be at the room during that time. If you can give us a few days’ notice, then usually we can make other arrangements, or reschedule. Note: if you are part of a larger group, e.g., you signed up for four slots and then two other people signed up to complete the roster, your not showing up will essentially make it impossible for them to do the room, so if it all possible we STRONGLY encourage you to stick with your original reservation.

If I signed up for four people, do we have the room to ourselves?

Probably, but not necessarily. As long as there are fewer than six slots booked, someone else could book those empty slots, right up until the time the run starts (15 minutes before the listed time). That means three things:

Is it really necessary to complete the original Professor is Missing mission before attempting the Return to the Lab sequel?

In our case the second scenario truly is the sequel to the first one, and assumes that at least one (preferably as many as possible) of the agents have completed the original scenario. Just like movies sequels often don't make much sense without having seen the movie preceding them, you’ll find that ours is much more meaningful if the original has been done first. Also, this will make it easier to not be distracted by elements in the room from the original.

How is it you're able to offer escapes at a cheaper price than any of the other escape rooms?

Good question! As a non-profit enterprise, it's not our goal to make money through the LabEscape project. However, we do have costs (rent, supplies, employees, etc.) that have to be covered. In fact, it's often the case that our income doesn't cover expenditures in a given month, which means we're quite often operating in the red. If you want help with this, please consider making a donation to the LabEscape project, which will help us continue to bring this unique entertaining and educational outreach activity to the community: https://LabEscape.org/#donate.

Who are the LabEscape agents?

All of our workers have completed at least several physics courses at the U of I, and were selected in part based on their ability to explain what's going on with any of our puzzles.